So I see the devs have jumped in once or twice now to pare down some of the content that'd been appearing in the Picture of the Week box: 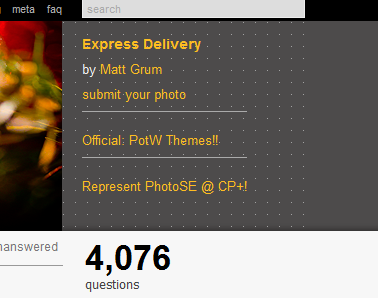 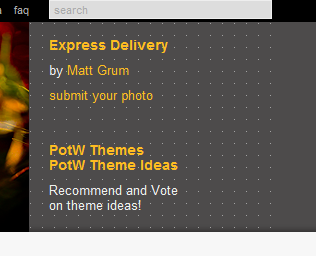 So there are... A couple of problems with these.

Ok, so the first few links make sense. The title links to the photo, the user's name links to his profile, and "submit your photo" links to the thread where a reader can do just that!

...Then there's PotW themes, theme ideas, and... An invitation to "represent".

Don't get me wrong - I love the idea of having and using a notification area for site promotional events. But let's be consistent here: right now, that area is meant for a featured image, and shoving all manner of links into it detracts from that. Which brings me to...

And I still don't know what that "Represent... CP+" link was for.

Remember: this is a highly visible part of the site. Whatever appears in that box appears on every single page. Don't junk it up! Treat every pixel like gold, and when you decide to add more text or a new link, make double sure it's going to be meaningful and useful to everyone viewing it.

The new "theme" links are much nicer. Thanks! 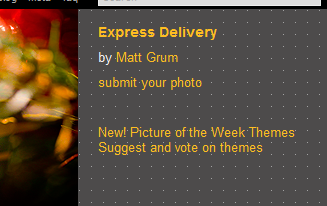 I'm sorry Shog, but why are you imposing rules like this on us? When Jin first told us about this feature, he told us it was for any custom content we wanted to put up there, not just for the Picture of the Week. We've expanded our weekly contest to include a monthly theme, and we need to get the word out about that, not just to the few who explicitly view meta.

I am the one who has been putting content up there, and its specifically because it is a highly visible area of the site that I linked the themes information. I don't see why having links up there is a bad thing, especially if there is something we want all our membership to see. Regarding CP+, if you were a dedicated photographer, you would know exactly what that was, its not a particularly cryptic thing in the photography world...an neither is Photokina or several other trade shows with odd names. You state that every pixel in that box is valuable, however lately whenever I try to utilize ALL of them, someone comes along and nukes my hard work. If your complaint is that all of the links are yellow, have Jin improve the styling in that area with an additional class that I can use on less important links to make them less visible, but still present (say bold white for the PotW links), rather than just coming along and bulldozing my work (its taken about 10 minutes each time to figure out how to pack the information tightly enough to prevent it from moving the text underneath the image because of how the formatting works.)

Regarding acronyms and initialisms, I wouldn't use them if the formatting of that box worked properly. I originally tried to use "Picture of the Week", however that forces the text content underneath the photo as it does not wrap naturally, hiding it from view. The only way to make it remain visible was to shorten the width of the text CONSIDERABLY, thus the acronyms. I only noticed this thread you've started because I came along today to change the second line, "PotW Theme Ideas", to "Submit Theme Ideas", to get rid of the repeated acronym, only to find once again my work had been undone.

So, we have decided on new links, and putting new links up there was something I had discussed or mentioned to our core membership a few times in our chat room. I would really appreciate it if you guys would stop undoing the work I've put into adding links we as a community think are important for our all community membership to see. Appropriate content up there should be something we, the members of this community, decide on...not something some far-off administrator who sees "CP+", the accurate and official acronym of the "Camera & Photo Imaging Trade Show", the biggest photography show at the beginning of every year, as just "junk".

I think this all brings up a very good point. It sounds like we(mods especially) would really appreciate a bit of work from Jin to improve the featured image of the week box. That is, if that is the true direction that SE is comfortable with us going, and it sounds like Jin has already suggested that as OK.

Not the answer you're looking for? Browse other questions tagged discussion featured-photo design .