Objections to moderator actions and the proper forum for resolution.

We have recently been receiving more "flagged" posts in the moderator tools. When I get home from work, I've been looking through them, and trying to address them. Recently, two of the actions I've taken on flagged posts were met with severe dissatisfaction from a particular member of the community in full public view of our membership. A post was closed in response to concern from a member, however in the other action, a simple comment was left to indicate that a mod had noticed the flag, but was generally going to wait and see what happened before taking any particular action. Both the closure and the simple comment were met with a fair amount of hostility from this particular member.

I am not certain if that hostility is personal or general, however it does not belong on the public forum. I would like to request that, if there is a dispute with a moderator action, or with a moderator specifically, that they be taken up here in meta, or in the StackExchange chat. Publicly venting on our main forum is not beneficial to the community. It creates a hostile environment that I don't think anyone wants to be involved in.

If I, or any other moderator, have made any decisions that any other community member has a dispute with, were glad to discuss them. If a post closure has broad disagreement in the community, those are easy to resolve if the community in general chooses to re-open them. However, it should be noted that not everyone here has the same opinion. Many moderator actions will be in direct response to a flag on a post. Flags and the reasons for them are not publicly viewable, and as such, the reasons behind a moderator action may not be clear or obvious. Some actions may be taken in response to concerns from members who chose to flag a post in confidence. Regardless of why they were taken, major discussions about moderator actions should be discussed here in meta, rather than in comments on the parent site. Thats what meta is for.

Jrista, as "this particular member" I'm happy to respond with precision, because I think this is at least a bit of a misunderstanding:

My initial comment on this question was intended to be light-hearted and I think calling it "hostile" is a stretch. Perhaps, at worst, pedantic sarcasm, though the hypothetical answer of the "High Guild of Portrait Photographer's Official Rules of Posing" does still make me snicker, and that's what I had in mind.

I thought you were yanking my chain with your response, which is what I asked, and what I reiterated at the end of the comment thread. How could an "official" list for any type of photography exist? Who would write it? What would make it "official"? New to photography you might be, but I know you're just not that naiive. So why be disingenuous? Mockery? or what? I still don't get it, nothing quite fits.

About this question, I felt you acted too early (I'm clearly not alone in that impression), and you'll see that I did link to what I felt was the appropriate meta topic before you told me to "take it up in meta".

I was short in my response for the simple reason that being told to "take it up in meta" immediately after pointing to meta was impossible to take in a good light. I already had taken it to meta, why tell me again?

While I'm sorry if I caused you personal distress, I think you need to take stock of your own actions here: you seem to be eager to take comments personally and pretty casually throw out the notion that someone's "going to war" with you. I intended neither.

Regarding that closure: There are, right now, only 74 people who can vote to close/re-open a topic they didn't start, and only about 2/3 of them have been online since the question was posted. Preemptive closure is asymmetrical as it acts as a large disincentive to improve the question. This makes it difficult to reverse even with broad agreement, and "leaving it to the community" is a pretty weak sauce in that context. I think it was a terrible decision, done precisely backwards from the consensus on good moderation practice, which could be summed up as "suggest improvements first" then "wait for a clear vote" – you did neither. Again, I think this was discussed here: The moderator power of "vote to close"

Just a reminder, but this thread discussed moderator closure. As I said there, moderators need to take care in closing questions or they will destroy the community nature of the site. I've been a moderator on a Stack based site and I never saw a direct need for moderator intervention, the community dealt with questions that didn't fit on their own, as it should be.

Regarding the "Modeling" question, I need to make it clear that I did not act on my own. There was no unilateral moderator action here, I responded to a pretty clear community response to it. By the time it came to my attention, there were already two votes to close it, a comment stating it was subjective and legal-local (and after reading it, I took this to mean that it brought to the table certain legal issues that differed depending on where potential answerers lived, which in turn could bring up answers that sat on some sketchy legal ground in certain locales). There had been at least one flag for moderator attention stating it was not really a question and subjective, as well as a second flag (I did not read it fully before clicking the first one, however both disappeared when I clicked the first one.) Additionally, its also been flagged as offensive by at least one person, but I did not check offensive/spam flags until recently, so I don't know if there were any others. 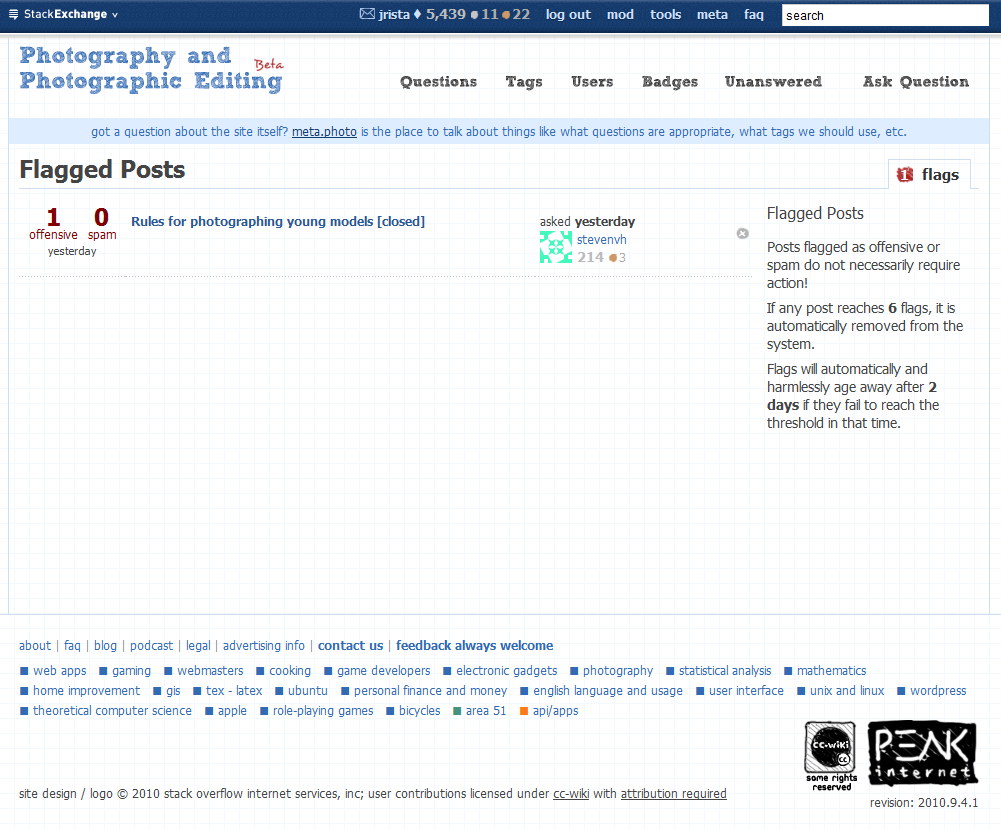 My decision to close this thread was based on a lot of community reaction to it. Not everyone on this site has the power to vote to close (you only get that when you hit 250 rep), so I can't say if the flags were from people who would have otherwise chosen to close it...but given the number of individual activities on this thread, there are at least 5, enough for a community vote of closure. I believe I acted in the interests of the community at the time, and I believe it was the correct decision. My own reasons for closing were the high volume of activity regarding it, the fact that it was not worded as a question, and the fact that it was not marked as CW when it clearly should have been, in addition to the other problems that community members had initially brought it to my attention for. I am honestly surprised by the considerable reaction to its closure, especially given that it continued to get down votes after it was closed.

In the long run, if the community wishes to reopen it, they can do so. There are more than enough people with the ability to vote to reopen on this site (some 70 or so). I would gladly reopen it myself, however I would still like to see it cleaned up to be a proper question, with its current contents posted as an answer. That would address most, if not all, of the concerns that were originally brought to my attention via flagging. Any controversial answers can be voted down by those who find them controversial or offensive, leaving the question behind it all (which I think could be useful) alive and kicking.

Sadly, this whole thing turned into a big controversy on the main site, rather than here in meta, like it should have been. (I practically begged Matt to start a thread here about it if he had issues that needed discussing, but he refused, and the issue was splayed out in a forum that wasn't designed for resolving such issues.) As a result, it has become a major point of public controversy, rather than being properly discussed and resolved in a more orderly fashion. I don't really know what to make of the topic now, however it is certainly going to be infamous at best, and likely controversial. At this point, I really don't want to have anything more to do with it. I acted in response to the community, including direct requests for moderator intervention, as well as a flag noting it was offensive. While there are clearly people who wish this topic to be open, there are also people who find it to be offensive, subjective, not properly formulated, posing legal problems, and a prime candidate for community wiki. Not everyone can be satisfied here, so I'm backing off of the issue, and will let the community decide, even if that means the thread ends up being opened and closed multiple times. While I believe I made the correct decision given the initial response to the question, I won't interfere if the community decides to reverse that decision. Its in everyone else's hands now.

Some sites solve this problem with heavy moderation. Other sites introduce structures to provide signalling of desired/undesired behaviour which reduce the need for moderation.
The design of Stack Exchange is particularly ingenious in this respect and ordinarily would not need much moderation. But for it to work it needs two things:
1) a certain critical mass. This site is not there yet.
2) a certain degree of consensus. Not enough time has elapsed to establish that consensus.

So for these reasons I think it is inevitable that there will be heavier moderation during the adolescence of the site, to be relaxed somewhat as the site progresses into adulthood.

When one is the target of moderation it is always irksome but if we are sincere about wanting the site to succeed we must accept it with goodwill and tolerance.

Not the answer you're looking for? Browse other questions tagged discussion moderators .

3
The moderator power of "vote to close"

2
How do we want to deal with "discussions" posted as new answers to questions?
5
Moderator elections to add help?
2
'Flagging' duplicates without privileges.
5
Why do we have at least two inactive moderators?
1
Should we reject edits which embed external images into a post?
1
How about a new tag: "Photo Re-Creation"?
3
Self disclosure
2
Stack Exchange employees: somebody do something about the contest
17
Is the Photo-SE community effectively dead?