Why did this question get upvotes?

This question is, by our standards, a pretty poor question - it doesn't contain nearly enough detail for us to work out the answer, and despite some polite prompting, the poster hasn't added an example. The question has now (quite rightly IMO) been closed as unclear.

Yet this question got four upvotes, which is more than a lot of perfectly reasonable questions got around here. On the assumption that there's not something fascinating about this question which I and the other close voters haven't spotted, do we have any thoughts as to what it is that made this question get a non-trivial number of upvotes, or more constructively, is there something we should change so that good questions get upvotes and poor ones like this don't?

It is completely unnecessary to up vote a question to allow the user to upload an image. As proof: 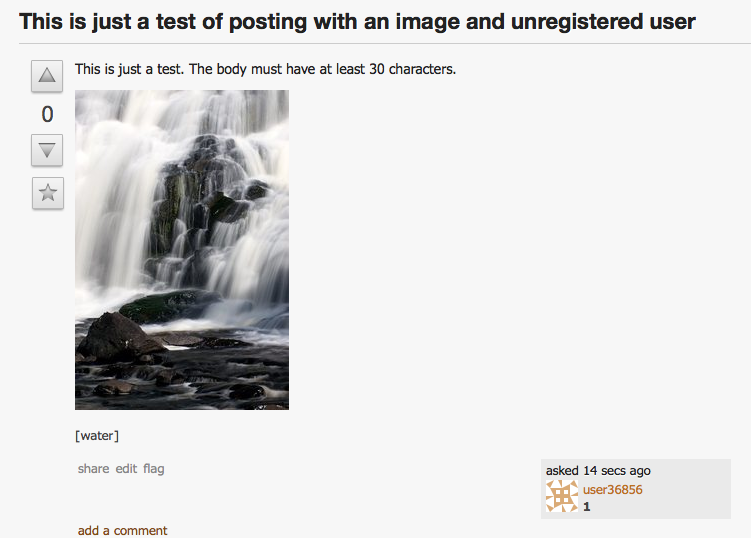 Note the unregistered 1 rep user, picture, and post. The post in question is this (it should be deleted soon and then become a 10k link).

So, the question of why the post gets upvotes? The misunderstanding of when you need rep to post a picture (its still required on Stack Overflow - just no where else), and Winter bash.

One reason to upvote questions like this a little bit is so that new users can upload images. In this case, the upvote isn't an indication that it's a great question, but that the asker isn't malicious, and hopefully will come back and make the improvements requested in the comments. (In this case, providing the details @dpollitt asks for, as well as a sample image). I didn't in this case, but I think upvoting until the user has 11 rep and voting to put on hold as unclear at the same time could make sense.

Apparently, somewhere along time line, the image posting restriction for new users was removed, relaxed, or replaced with some other more complicated heuristic. Even unregistered users now can post images without upvotes. But, this wasn't ever announced in a big way (I don't see anything on meta), so many long-time users don't know that. Thanks to MichaelT for performing the experiment. I still think that this is the correct answer for what happened, though — even if we don't need to do that anymore.

However, that doesn't explain the +5 — here, I agree with the comments above that winter bash is probably to blame.

I would say its a simple case of "me too" voting. What can help with example questions like this is encouragement to post examples from perhaps not only the op but also any supporters. Ultimately the correct way to deal with unclear questions is to close them. Without a clearly defined question, even a good attempt at an answer isn't going to cover a particular problem, but can only blanket cover a broad range of problems poorly and is not fitting of the SE forums.

As noted in mattdm's answer, what was (at least partially) happening here was that people were upvoting the question so that the poster would have enough reputation (10) to be able to embed images into the question and turn it into a good question.

However, when I saw what I thought was a bad question with upvotes, I downvoted it thus (partially) undoing what others were attempting to achieve. If we see this sort of situation in future, which isn't that uncommon, would it be worth upvoting with a comment like "Upvoting purely to enable the poster to embed images - see this post on meta". Or is this just too much work to be worth it?

5
Macro shot Q - Why the downvotes?
1
Is this question about specific camera model possible to rescue or it's per definition off-topic?
3
Do people just not read the whole question?
1
Why did this question asking for broad critique get 20 upvotes rather than getting closed?
1
When to Downvote due to a Language Barrier
4
How should we handle the "what (Instagram) filter is makes this photo" type questions?
6
Back-editing "What's this effect" questions
14
Contest is definitely dead. Now what?
3
Enable MathJax for formatting mathematical formulas?