I notice that featured image threads accumulate both submissions and votes at the same time. This means that there's a bias towards submissions that happen earlier in the week. Also, the time at which voting closes is not specified in the question.

That doesn't seem right to me, for three reasons:

I'm a scientist, so I like numbers. I went through the last six weeks of featured image threads and wrote down the votes of each image and the number of days prior to the "week of" day (since the voting deadline is never specified, I can't count how far before the deadline it was).

I found no relationship between fraction of total answer votes on the question and submission time (while people can keep voting after a featured image thread closes, I suspect this didn't have a large effect).

However, I then looked at when people submit (sorry for the inappropriately large graph): 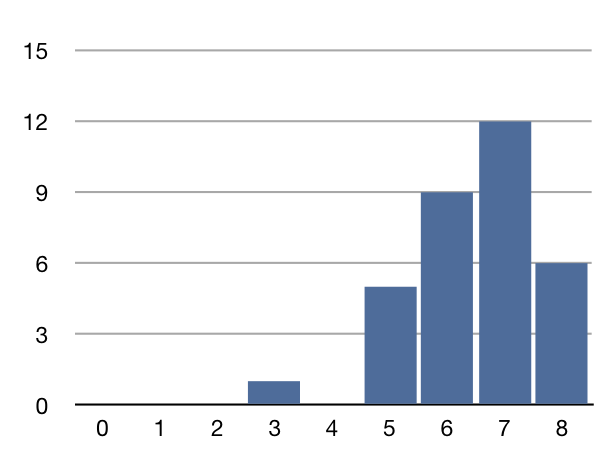 Bottom line: We already behave as if there are distinct submission and voting periods. Let's be explicit and honest about this.

(By the way, I still believe that there's much bias towards submissions that happen early, but since they all happen early, there's no practical effect.)

At a bare minimum, let's at least give a specific date/time when voting closes.

Thus, at any given time there is one thread for submission and one for voting.

With overlapping periods like this, that means that any time is a good time to submit an image, rather than only some days of the week.

This does complicate slightly the guideline that no one person should be featured two weeks in a row. I propose we simply keep the existing rule that one shouldn't submit if currently featured. It does become possible to have the same person win two weeks in a row, but I think that we can wait and see if that becomes a problem.

I don't believe we need any technical enforcement of this proposal for now, and that convention can take care of things for now. It would be nice to be able to turn on and off voting for a thread independently of closure.

I don't think it's an issue. The current photo of the week was actually submitted only a few days before the end of the voting period.

It's early Sunday morning (PST) and of the 8 submissions over the past week, the most recent 3 submissions hold 2 of the top 3 spots. Yeah, that's a sample size of one (week), but I think that means this isn't a big issue. Remember that anyone who cares enough to vote early in the week can still log in late in the week and cast new votes and even undo their original votes.

What's next, do we prevent the creation of shill accounts (i.e. set a minimum rep for voting) so people can't stuff the ballot box? I'd feel honored to lose to someone who cared enough to go to the effort of creating multiple accounts to win this contest.

If someone feels like they lost because they had a great image but they entered at the wrong time (or were up against too stiff of competition) they're allowed to re-submit the following week, on whatever day they choose. After all, this is all for fun (well, and hopefully a badge). If it gets too burdened down with rules and regulations, it'll lose that feeling of fun.

If we want to codify what appears to already happening, that would be:

I think item 2 should be given with a specific date and time.

8
Weekly Featured Image - should late votes count?
3
Can we prevent featured image answers from being voted on after the question closes?